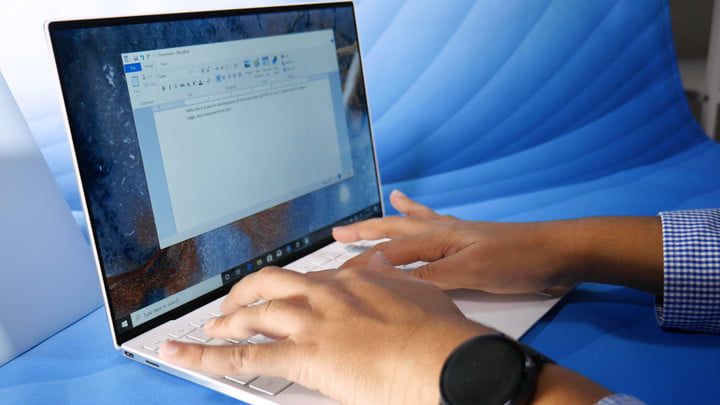 Dell XPS 13 vs. MacBook Pro 13. The Dell XPS 13 has been a fantastic laptop since it’s relaunch in 2015, but every design gets old after a few years. In 2019, Dell unveiled a revamp of the laptop with the webcam back on top, which now makes it even more comparable to the MacBook Pro.

Now, Dell is back with an even better XPS 13 in 2020, improving its display and portability. Can Apple’s long-lauded MacBook Pro still compete? In this guide, we pitted design, performance, and more against each other to help you determine which one is best for you.

Design will always be subjective, but these two laptops are at the top of their respective games. In particular,  the MacBook Pro’s design is simply iconic. It’s been iterated upon over the years, but the aluminum unibody look remains largely the same — and it’s not anything people complain about.

One of the great things about the Dell XPS 13 is that it never attempted to clone anything the MacBook Pro did. It had its own sense of style, which got better in 2019 with new Frost color options and a brighter, whiter interior. Despite moving the webcam up top, the XPS 13’s ultra-thin bezels remain thin, resulting in a laptop with a tiny footprint on the table.

For 2020, Dell slimmed the bezels on the display and on all four sides of the screen significantly, especially on the bottom.  It now sports what Dell calls a 13.4-inch, four-sided InfinityEdge display. In layman’s terms, this allows Dell to squeeze a bigger display panel into the size of an 11-inch laptop. That all means it sports a 91.5% screen-to-body ratio.

The MacBook Pro, however, isn’t bad in this regard, but the XPS is definitely a trimmer machine. What really sets Dell’s laptop apart is the option of a white and rose gold color scheme or the black carbon fiber texture on the palm rests and screen. The weight, meanwhile, comes in at 2.65 pounds and 0.58 inches. That’s close to the MacBook’s 0.59-inch thickness, but definitely easier to carry around, considering the MacBook’s 3.02-pound weight.

Apple’s improvements to the keyboard and input methods on the MacBook Pro are a mixed bag. We didn’t like the third-generation butterfly key switches found in the latest MacBook Pro at all, which present a stiff, abrupt bottoming action that can make long typing sessions tiresome. That said, the MacBook Pro’s large Force Touch trackpad is truly superb — we rate it as the best in the industry, bar none.

The XPS 13’s keyboard and touchpad are comfortable, with a smooth key travel and less slippery keycaps. In fact, Dell chose to redesign the keyboard on the XPS 13 in 2020 so that it’s more of an edge-to-edge design, and its keycaps are 9% larger. Even the trackpad got bigger, now 19% larger over the last generation.

On the other end of the scope, the MacBook Pro traded the XPS 13’s larger keyboard and trackpad for a Touchbar. It’s a multitouch OLED display that replaces the MacBook’s top row of function keys and adapts based on whatever software you’re using. The technology sounded promising at first, but it turned out to be completely forgettable, and really needs further development to reach its potential. You may love it or find it redundant.

As expected, the new MacBook Pro features either two or four Thunderbolt 3 (USB-C) ports (depending on the model you select) and a single 3.5-millimeter headphone jack. While USB-C support continues to grow, a lot of users may still be put off by the lack of standard USB-A ports. The new 2020 XPS 13 is similar, offering just two Thunderbolt 3 ports, though it ships with a USB dongle. It includes a microSD slot as well.

Dell struck a good middle ground with its new XPS 13, and we think it has a nice balance of high-powered, future-proof ports and accessibility with older accessories.

Both laptops feature options for Intel’s Core i5 and Core i7 CPUs. However, Dell has a slight edge, as it offers a third budget-friendly Core i3 option, along with Intel’s latest 10th-generation Ice Lake processors. Apple is slightly behind in this matter, as its 13-inch Macbook Pro sports eighth-generation chips as standard. If you want more recent options from Apple — at least for now — go with the bigger 16-inch MacBook Pro.

Now let’s take a deeper dive, first with the XPS 13.

These Core i5 and Core i7 processors offer more core counts than the base model and also come with Intel’s improved 10th-generation integrated graphics, known as Iris Plus. The Core i7 models enable light gaming.

Neither comes with a discrete graphics chip, so don’t expect to play AAA games on either of these laptops, unless you’re prepared to shell out extra for an external graphics card (eGPU). With both laptops supporting Thunderbolt 3, that’s an option if you don’t mind the added cost.

So, which laptop offers better performance?

This is an easy answer. Although both will serve you well for multitasking, the XPS 13 wins because it has modern 10th-generation Intel processors, as well as slightly improved integrated graphics for light gaming.

Thanks to the slimmer four-sided Infinity Edge display, the XPS 13 sports a 16:10 aspect ratio to help maximize screen space. Similar to the MacBook lineup, this aspect ratio now means that you should feel as though there is more room on the screen for your content when web browsing. You’re also getting a bigger screen-to-body ratio on the XPS 13, as it is rated at 91.5%.

The Ultra HD+ model also claims HDR 400 certification, with 500 nits of brightness, a 1,500:1 contrast ratio, and 100% of the sRGB color space. However, this model results in a noticeable drop in battery life, making FHD+ the better option.

That means if you don’t want to compromise on battery performance, you must settle for a lower resolution than the 2,560 x 1,600 offered by the MacBook Pro. Still, the XPS 13’s screen remains one of the best displays you can buy in a laptop, though still some way behind that in the MacBook Pro.

Display quality has long been one of the MacBook Pro’s strong points. Its Retina display isn’t 4K, but it’s sharper than 1080p. The MacBook is known for its great color accuracy, color gamut, and noticeably better brightness. Its color error rate of 0.72 is one of the lowest we’ve ever seen, while its superb 1,200:1 contrast ratio offers deep blacks and brilliant colors.

Meanwhile, the Dell XPS 13 uses the same display installed in the 2-in-1 version released in 2019. As we detailed in our review of the new XPS 13, it features one of the best contrasts to date, along with excellent color accuracy. The seeming lack of side bezels presents a wider feel.

Both the MacBook Pro and XPS 13 are slimline laptops that offer plenty of portability, but the XPS definitely has the edge here. It’s both lighter and thinner than the MacBook Pro, making it super easy to throw it in your bag or hold in your hand. As for battery life, that’s a different story.

Our testing in 2019 showed some worrying behavior from the XPS 13 in terms of its battery life. When testing the 4K model, we saw a 25 to 30 percent drop in light web browsing and local video loop playback over the 2018 4K model, despite having the same display and battery.

In our tests with the 2020 model, the FHD+ configuration saw 11.5 hours of light web browsing and 14.5 hours of local video playback. However, heavy tasks drained the battery in five or so hours. Expect those battery times to fall with the screen configured at Ultra HD+.

The MacBook Pro also took a step backward in terms of battery performance. The 2019 model’s 58 watt-hour battery is noticeably smaller than the previous version’s 74.9 watt-hour battery. Our video loop test drained the battery in 10 hours and 24 minutes. The MacBook Pro will last you through a day of normal usage, but if you want better battery performance, the 1080p XPS 13 should last longer.

Dell settles into the throne

All that said, we still think the XPS 13 comes out on top in this comparison. It offers better portability, a more immersive screen, a newer and better processor, and superior value for the money. You also get an attractive laptop that creates its own style, neither aping Apple’s metallic finish nor the sea of all-black laptops in the Windows world. It’s a laptop to be seen with, and for good reason.

Ultimately, we think you’ll be happy with either laptop, but a lot of your choice will depend on the operating system you most prefer. However, if you’re open to both the Apple and Windows worlds, the Dell XPS 13 is a fantastic option.